Prompt Disguised as an Argument 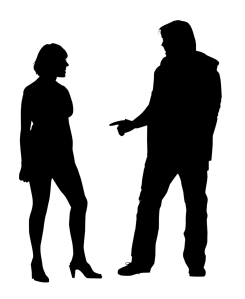 Jesse and I were in the car the other day, headed to the city for my last day of radiation. We were in a sort of grouchy mood. (It was very early in the morning, not to mention the fact that the world is falling apart around us. Stupid thermodynamics. Not to mention the state of the nation.) Trying to make Jesse laugh, I said, “Hey, I have an idea! Let’s have an argument all the way up to the city and back, so we can know how the rest of the world feels to have strained relationships on top of all of their other problems. Then we can spend the rest of our lives being happy that we don’t have to worry about our relationship.” At first, he wasn’t amused, but then I started in complaining about his sister. (He’s an only child.) After that, we started coming up with all kinds of fictional ideas about which to argue. It was so much fun! So I thought I might share it with you all as an imaginative writing prompt or acting prompt. You will need a partner for this one though. Have fun – and let the words fly!

BTW, this exercise is also a great stress-reliever!

This entry was posted in A Prompt Disguised, Creative Writing and tagged acting prompts, argument, relationships, thermodynamics. Bookmark the permalink.

2 responses to “Prompt Disguised as an Argument”