Independence with a Safety Net

The other day, I was reading a very nice blog that I like to follow for courage and inspiration. In her post entitled Downhill, she writes about the experience of watching her little guy grow up. He’s only five and just entering kindergarten and the real world, but as I read, I can see my own thoughts about child-rearing mirrored in her actions. I’ve never put it into words before, at least, not as nicely as she does in this post. However, having been in the inner circle of numerous homeschooler families, I have seen a lot of different parents raise their children in a lot of different ways. It occurs to me that my beliefs about how I am raising Ian into adulthood coincide perfectly with the following method, taken from the blog Family, Work, Life:

And as he grew, I parented him with a hedge of protection but also with a fair amount of space.  I gave him whole sandwiches when other kids were still having their food cut into small pieces.  I used big words and sentences instead of easy ones.  We exchanged the sippies for big-boy cups to see if he could learn through trial-and-error.  He did things on his own, made messes, made mistakes, and got frustrated.  He also mastered skills and experienced the pride of success.

But I was always there to pick up the pieces if something went awry, comfort him when he got upset, and help him out if something just wasn’t working.

He might have been learning about the world on his own terms, but he was never alone. 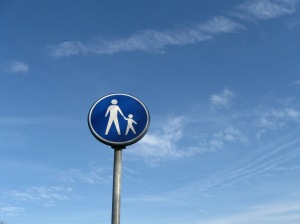 I think that plenty of parents do this for their toddlers, but here’s a question for you: Why can’t we do this all the way through? Up until the day they move into a place of their own. And after, if they’re willing to call us once in a while and catch us up. Why can’t we allow them to make almost all of their decisions, while being there to catch them and make sure they don’t ruin their lives? And, if we’ve raised them properly, how many children actually end up ruining their lives anyway? I don’t even know anyone in prison or living on the streets somewhere. Now, there are things that are non-negotiable in Ian’s life: School. Church. Instrument Practice. Reading his Bible every day. And I make sure he spends time away from his video games, etc. But aside from that, I give him plenty of space and the liberty to make most of his decisions.

I know I’m not the authority on parenting, but I do know this: I like my kid. I enjoy being in the same room with him, spending time with him, so hopefully that means I’m doing something right. I’m proud of the young man he’s becoming and the decisions he is able to make on his own. Hopefully I am raising an independent adult and not someone who feels entitled. However, I am open to suggestions, and I realize that not every method works in every family. Have you raised your children differently? How did you do it? And are you satisfied with the results?